Third PS. CD, this time with Satu Wilkman on vocals.

We, or I, decided this time around to use another singer. Pale played in Auringon Lapset and they had two ladies singing backups. Satu was the one we decided to try out and liked the result. So she was instrumental from the arranging process onwards in shaping the mood and sound of Oma Maailma.

Another new player was Teijo Tikkanen aka Mr T, who I met at Suomenlinna’s Seawolf Studios while recording and mixing “Onni”. Teijo is a super talented multi-instrumentalist who at the time had rented the small studio 4 at Suomenlinna and made Wolf Larsen and Corey & Maple + other stuff there. We got along fabulously and so it was only natural to ask him to co-produce our next CD. Pale had, for reasons only known to him, faded out a bit, so Teijo took on his role as a partner in crime somewhat. As we arranged the songs it seemed obvious to use Maple to Teijo’s Corey : Tero Mikkonen aka Zatopek on drums for some of the songs. Kepa Kettunen had played on Onni in couple of songs, so I asked him to play on OM as well. I don’t know why, but this time Kepa just couldn’t deliver so we ended up using only his hihat and a snare sample. So, what to do? Call Kuoppis, of course. Sami Kuoppamäki, drummer extraordinaire, was ready and willing. And boy, did he deliver. The stick work for example in “Vain Kerran” is impeccably musical. Listen:

Another great performance on that track is Jaakko’s end solo, raises the hairs on my arms every time! Teijo did about half of the basses and a lot of guitars and keyboards, also of course giving lots of input on arrangements and sounds etc. As Teijo is very much a groove oriented person, there’s some r’n’b and hip hop flavours here and there. DJ Slow did some nice turntablisms on two songs, “Tuore Sydän” and “Ketju”. While mixing, I had an extra pair of ears present in the form of Petri Alanko, who helped when I had doubts (To my annoyance, Teijo had decided to move back to Nurmes, so we did the mixing long distance/email etc.). As almost everything was different on this album, so would the mastering engineer be as well. Svante Forsbäck did this one. While doing an excellent job of it, we didn’t connect like I had with Pauli Saastamoinen, so Pauli has done my mastering from then on. This CD is probably the most fragmented of the three. All the songs sound and feel great by themselves (some tempo and dynamics issues aside), but as a whole, it’s a disappointment. Maybe Satu could have put more feel to the songs as well, maybe. One song that clearly points the way things were going (and also features as a sample on DJ Slow’s and Tapani Rinne’s SlowHill song Fennika) was R.U.Mental?, the instrumental. The later instrumental flavours can clearly be heard here.

One thing that didn’t and hadn’t changed was the cover work of Tomi Laaksonen. Once again, really nice work from him! 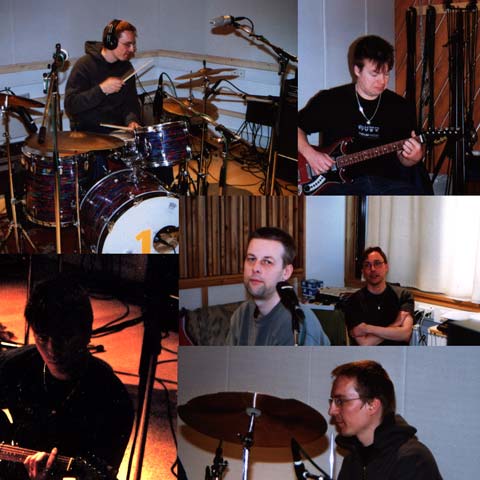